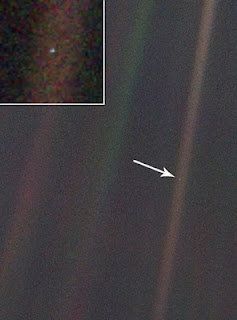 I stumbled across this image the other day on a blog called "a simple prop."

It's a photograph of the planet Earth, snapped by the Voyager in 1980 on its way out of our solar system (still within a razor's edge, astronomically speaking). Astronomer Carl Sagan famously commented on the ramifications of the perspective this photo brings:

Look again at that dot. That’s here. That’s home. That’s us. On it everyone you love, everyone you know, everyone you ever heard of, every human being who ever was, lived out their lives. The aggregate of our joy and suffering, thousands of confident religions, ideologies, and economic doctrines, every hunter and forager, every hero and coward, every creator and destroyer of civilization, every king and peasant, every young couple in love, every mother and father, hopeful child, inventor and explorer, every teacher of morals, every corrupt politician, every ‘superstar,’ every ‘supreme leader,’ every saint and sinner in the history of our species lived there — on a mote of dust suspended in a sunbeam.

The Earth is a very small stage in a vast cosmic arena. Think of the rivers of blood spilled by all those generals and emperors so that, in glory and triumph, they could become the momentary masters of a fraction of a dot. Think of the endless cruelties visited by the inhabitants of one corner of this pixel on the scarcely distinguishable inhabitants of some other corner, how frequent their misunderstandings, how eager they are to kill one another, how fervent their hatreds.

Our posturings, our imagined self-importance, the delusion that we have some privileged position in the Universe, are challenged by this point of pale light. Our planet is a lonely speck in the great enveloping cosmic dark. In our obscurity, in all this vastness, there is no hint that help will come from elsewhere to save us from ourselves.

The Earth is the only world known so far to harbor life. There is nowhere else, at least in the near future, to which our species could migrate. Visit, yes. Settle, not yet. Like it or not, for the moment the Earth is where we make our stand.

It has been said that astronomy is a humbling and character-building experience. There is perhaps no better demonstration of the folly of human conceits than this distant image of our tiny world. To me, it underscores our responsibility to deal more kindly with one another, and to preserve and cherish the pale blue dot, the only home we’ve ever known.

I've pondered the significance of our place in the cosmos many times; I even found a prior blog post on the subject.  It's entirely true that the scale of our planet to the others in our solar system, and that of our massive sun to the majority of its stellar neighbours, is minuscule.  It's also true that the distances between stellar systems make even the superlative sizes of Betelgeuse and Antares seem like specks.

I can't imagine going through life thinking that life itself is a giant series of coincidences, like the final destination of a Plinko disc.  Far better to grasp the extended hand of God and embrace the infinite mystery of his love.
.
Posted by James V. Kautz at 9:44 pm 1 comment: Links to this post

This Christian musician is probably the most obscure of my favourites, even taking into account my affinity for Rick Cua.  He is also the most recent addition to my list of favourites.

He is Mark Mallett, a small-town boy who grew up to marry and have eight kids (so far).  I was first introduced to his music when I sang with the worship team at St. Mary's Church when we lived in Ottawa about ten years ago - our worship leader had attended John Paul II Bible School with Mark in Radway, Alberta.  Just a few years ago, I met him in person at a small Christian music festival called "Rock The Grott" in St. Malo, Manitoba.  I purchased some albums and a songbook, and was drawn to his prayerful worship style.

One of my favourite songs is Let The Lord Know (follow the link to listen to a snippet of the song).  It's got a catchy tune, and the lyrics are based around the seven sacraments in the Catholic Church, which I thought was very clever.  If you like it, you can purchase it from Mark Mallett's website.

I'd highly recommend it, if for no other reason than he's a professional Catholic musician from Saskatchewan.  His wife told a joke at Rock The Grott: What's the difference between an professional Catholic musician and two extra large pizzas?  Two extra large pizzas can feed a family of ten.
.
Posted by James V. Kautz at 5:39 pm No comments: Links to this post