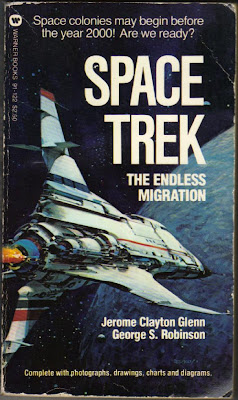 A few months ago I finished reading Space Trek: The Endless Migrationby Jerome Clayton Glenn and George S. Robinson. The cover art grabbed my eye: I thought it would be one of the old cheesy sci-fi novels I enjoy so much. But I looked a little closer and saw the catch phrase across the top of the cover: "Space colonies may begin before the year 2000! Are we ready?"

Naturally, the first thing I looked at was the year the book was published: 1978, around when I was learning the alphabet.

I couldn't resist - I had to see what the authors had to say about the projected future of technology and civilization. Naturally, they were off-base about the space colonies bit.


They spoke quite highly of Syncon (short for synergistic convergence), which was "a new kind of conference. Several hundred highly diverse people got together over a period of a several days to discuss and examine the various future space options." Started by The Committee for the Future, it was apparently a "well-known" conference. Never heard of the Syncon convention? Neither has Google or Bing.

Nevertheless, in 1972 Syncon brought together a bunch of people who said that were on board for a given space project or technological initiative but felt unsupported by the rest of their peers across their industries. The idea was to show them all that they all had the same vision and goal. How's that working out for ya?

In 1977, US Congressman Olin Teague introduced House Concurrent Resolution 451, which was a pitch from to adopt a proactive approach to space exploration and energy harvesting. This type of resolution is the political equivalent of newspaper on the floor of a bird cage, so it's no surprise that it hasn't become a significant historical document. But the authors of Space Trek predicted that Resolution 451 "could become a Magna Carta for the future." Ouch. It was a bold prediction though, I'll give them that much.

That Committee for the Future doesn't appear to exist anymore, although if I felt like taking a tour of their old headquarters the book helpfully lists it at 2325 Porter Street NW, Washington, DC 20008. Google Streetview hasn't been down that private road, but the overhead view reveals an amazing looking estate. SourceWatch says:

In September 1973, the CFF moved its headquarters to a mansion in Washington known as "Greystone" and called it the New Worlds Training and Education Center. A number of volunteers lived there in a sort of commune, receiving room, board, and a small stipend.

Nice work if you can get it.

Once Glenn and Robinson started discussing the logistics of living in space, they wondered what sort of entertainment "Spacekind" (their term for humans living in space) will enjoy. Um... ahem:

What kind of entertainment will be available? Microwaved coverage of the Army-Navy football game? Electronic sexual affairs with Earthkind? Sexual playpens with spherically padded walls and a large water-filled ball as a bed?

Over the next twenty years biofeedback technology is expected to become far more sophisticated and microminiaturized. It's far from fantasy to imagine eyeglasses, hats, pants, and other articles of clothing equipped with electronic stimulators and sensors; these would transmit impulses, messages, even sensations via small microwave units to one's lover in a kind of electronic sexual affair.... Those of Earth might even get some "sensation" of what it's like to experience sex at zero-G.

In a chapter on the possibility of space war, they discuss
what weapons might be used in the future.

In a "space war," the weapons could be frequency manipulation, particle accelerators, lasers, psychic or parapsychological "sorcerers," orbital rockets, and hunter-killer satellites.

I can almost hear the combat chatter over my microwave radio now: "Fear me and tremble, space soldiers! I am Gortak the Invincible, and I call upon all the powers of the underworld to rend your craft to pieces!" followed by "OH S$%@! OUR HULL IS BUCKLING! ALL HANDS TO THE ESCAPE PODS!"

The book frequently falls into the trap of '70s spirituality, spouting New Age catch phrases throughout and predicting that the new social construct of Spacekind would require the evolution of a new morality. Morality, the authors state, is "an intellectually codified set of responses accepted by civilizations as survival-oriented behavior patterns under a given set of influences. And these influences, or prevailing realities, change."

Hogwash, I say. Morality is more than just a collective thrust towards survival. It's thinking like that that glazed over atrocities like the Holocaust or Tianenmen Square; when the inherent dignity of the individual is denied, the deniers are capable of all kinds of evil. Those who say morality changes say so because they have to find a way to justify the fact that they aren't living according to the "previous" moral code. To those people, I would ask - if you were vaulted into the past (by a sorcerer, for example), would you willingly change your moral code to match that of the era in which you lived? If you ended up in the heart of Puritan or Victorian times, would you adopt a lifestyle of chastity because that was the social norm? Or conversely, if you landed in 1930s Germany, would you be silent in conformity with the majority and let the Jews be rounded up?

The book isn't all retrospective goofiness, however. Glenn and Robinson do make a few predictions which turned out to be true. In discussion on the broad impact and potential spinoffs of technological advancement, they predict that:

Third World countries will no doubt make great moves toward conventional industrialization; however the catch-up move will be integration into the Space Age communication system. Through satellites and computers, villagers in Africa will receive the best education and medical diagnosis and treatment that Industrial Age money can buy. Farming can be greatly improved through satellite photography.

And I absolutely love this quote from another one of the Committee for the Future's workshops on what society must do to promote general human advancement:

This requires a world-wide and real-time interactive information system with easy access to all individuals. This new media gives and receives information when you want it, where you want it, and in the style you want it. It is the key condition to nurture decentralization. It gives local access to world resources and it allows all people the opportunity to evaluate, monitor, and model the dynamic relationship between population distribution and resources distribution. The mistakes, injustices, and change options become apparent to all. It is the little boy saying the emperor is naked, the emperor has no clothes.

Perhaps some sort of series of tubes can make that happen.
.
Posted by Doogie at 11:21 pm