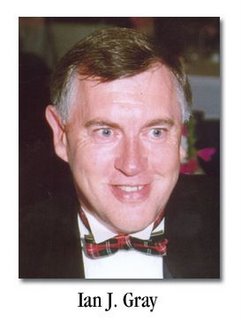 IN MEMORIAM of Ian J. Gray

For those of my readers unfamiliar with Mr. Gray, he was a passenger on American Airlines flight 77 which was flown into the Pentagon on September 11, 2001.

I've signed up for the 2,996 Project, in which 2,996 bloggers have volunteered to honour the 2,996 victims of that day. I, nestled securely in the middle of Canada, knew none of the victims. I claim no ability to empathize with their loved ones; such a loss is a horrific blow to any circle of friends and family, so I won't pretend to have insights into Mr. Gray's life that I really don't have.

However, from comments made about him on various memorial websites (1, 2, 3, 4, 5) and other web search results, I've been able to infer the following:

He was born in Scotland, emigrated in 1968, and became a naturalized US citizen in 1979 (though he never lost his love for the bagpipes). He and his wife Ana were very much in love. His daughter Lisa misses him terribly. He had an infectious smile and loved to laugh at life's absurdities. He had a giving heart, loyal to the last. He was president of McBee Associates, a health care finance consulting firm, and served on the Board of Trustees for the Baltimore Medical Center. His contributions to both companies were immense - especially as a mentor to his peers - and the people he worked with still struggle with his absence. At company social events, he always played the role of babysitter, thoroughly enjoying playing with the kids while the adults did all their grown-up stuff. I presume he was a golfer. He loved to smoke cigars in Cancun.

He believed in dragons, and believed that we should not be afraid of them.

For having never met the man, he sounds like somebody I really wish I'd known.

May you rest in eternal peace, Ian J. Gray. May God grant solace to your loved ones.
Posted by Doogie at 3:40 am