Again, let me reiterate that the order of these songs is irrelevant - just like my kids, I love them all the same.

So without further ado, number ten is True Believer by Hokus Pick, a now-defunct Canadian band who were based out of Vancouver.  I saw them in concert a few times, most recently around the year 1999, the year they stopped making new albums.  I wore my Hokus Pick t-shirt, with their logo crammed into a Superman S-shape.  After the concert, one of the band members looked at my shirt and commented, "Wow, that's a really old one."  I bought one of their newer shirts after the concert, and I still have it today (hanging in my closet next to the Koo Crew one). 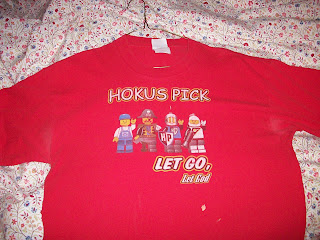 They are roughly comparable to The Barenaked Ladies in style, but happily they don't have an offensive band name.  Their albums are heartfelt, yet vibrant and full of fun.  Some elite musicians may scorn their compositions as amateurish, but as an amateur musician myself I very much appreciate being able to pick out the chords and play along.

To hear True Believer on iTunes, click that link and play the sample (track 8).  Why not buy the whole album there and give these good Canadian boys a few cents?  There's a hidden track at the end that's easily worth $10.

The lyrics are what I appreciate most about this song:

I'm not a rock.
Do I believe it not?
For I have denied the grace I've received by name
The saints of old chickened out when the rooster crowed
Still they were forgiven without consequence or blame

Songs like this give me a great assurance that no matter how hard I fall in my faith, the faithfulness of God is more powerful than any sin I can contrive.  It's OK to be imperfect in my quest for holiness.
.
Posted by James V. Kautz at 10:56 pm